Jan. 23 (UPI) — A New Jersey man caught trying to skip a toll on the George Washington Bridge is accused of 888 toll violations totaling more than $56,000.

Pentangelo said the driver, Alesandel Rodriguez, 31, had a New York license tag in the back windshield of the car that expired Dec. 15.

Police discovered Rodriguez’s EZPass accounts had been revoked and that he was accused of 888 EZPass toll violations during the past five years — totaling $56,240 in owed tolls and ensuing fees.

Rodriguez was arrested and charged with theft of services. He was issued several traffic summonses and his car was impounded.

The suspect was turned over to police in Teaneck, N.J., after he was found to have an outstanding warrant.

The arrest came less than two weeks after Port Authority police announced the arrest of a man accused of racking up a $12,000 bill by skipping out on toll payments. Julian Garcia, 42, was arrested Jan. 12 on the New Jersey side of the George Washington Bridge. 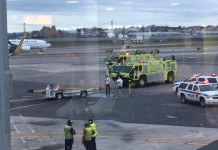