Feb. 13 (UPI) — Biologists have discovered a new tarantula species with a one-of-a-kind horn-like protuberance on the arachnid’s back. The unusual spider was found in Angola.

Scientists identified the new species while carrying out the National Geographic Okavango Wilderness Project, an effort to describe the biodiversity within the Okavango region at the intersection of Angola, Namibia and Botswana.

By documenting the plants and animals living among the intersection of several unique ecosystems in Southern Africa, scientists hope to encourage enhanced conservation efforts in the region.

“The general paucity of biodiversity data for Angola is clearly illustrated by this example with theraphosid spiders, highlighting the importance of collecting specimens in biodiversity frontiers,” researchers wrote in their paper describing the new species, published this week in the journal African Invertebrates.

The newly discovered species, Ceratogyrus attonitifer, belongs to a group of tarantulas known as horned baboon spiders. Not all of the group’s members boast horns, and no other species features a horn quite like the C. attonitifer.

“No other spider in the world possesses a similar foveal protuberance,” the scientists wrote.

The newly discovered tarantula horn is longer and softer than the protuberances found on the backs of similar species. Researchers aren’t yet sure of the horn’s purpose.

During field surveys, scientists occasionally encountered the horned spider among open sand, but most of the specimens recovered for research purposes were retrieved from underground burrows in the miombo forests of central Angola.

When researchers placed objects inside the burrows, the spiders were quick to attack. When threatened above ground, the spider takes a defensive stand by rearing up on its hind legs and raising its front appendages in the air.

Though undescribed in the scientific literature until now, the baboon spider was well known by local tribes. The native groups call the spider “chandachuly.” They helped the scientists better understand the species’ behavior.

The research suggests the tarantula’s venom is not dangerous to humans, but the spider’s fangs have caused a handful of fatalities after the bites became infected. Access to medical care in the Okavango region is limited. 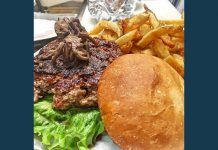 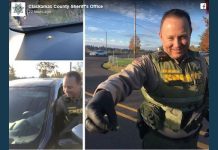 Deputy comes to rescue of driver with spider on the dashboard 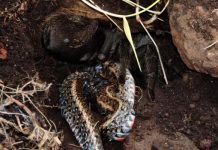