March 3 (UPI) — Malaysian authorities said Ri Jong Chol, a North Korean man arrested days after Kim Jong Nam‘s death, will be released and deported due to a lack of evidence.

The 47-year-old man from North Korea worked at a local anti-cancer drug company in Malaysia. He was arrested on Feb. 17 for his alleged involvement in the death of Kim, North Korean leader Kim Jong Un’s half brother.

Malaysia on Thursday said it would require North Koreans to acquire visas to travel into the country effective on Monday, citing security concerns. Previously, North Koreans could visit Malaysia for up to 30 days without a visa under a mutual deal.

On Sunday, Malaysian authorities said that Kim died within 20 minutes after VX, an internationally banned nerve agent, was splashed in his face by two women at a terminal of Kuala Lumpur International Airport on Feb. 13.

South Korea has accused North Korea of ordering the “terrorist” attack to remove the brother as a potential rival. On Tuesday, South Korean Foreign Minister Yun Byung-se suggested North Korea be expelled from the United Nations.

Malaysian authorities charged the two women arrested in the attack with murder on Wednesday. Vietnamese national Doan Thi Huong and Indonesian citizen Siti Aisyah said they were told the attack was a prank for a reality TV show and that they were paid about $80 each to participate.

Police are looking for three suspects for questioning, including Hyon Kwang Song, 44, second secretary at the North Korean Embassy in Kuala Lumpur. 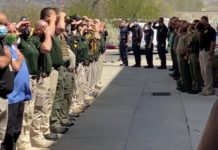