Feb. 13 (UPI) — A New York City Police detective was killed by friendly fire during a robbery Tuesday night in Queens.

Police Commissioner James O’Neil said the death was “an absolute tragic case of friendly fire” in a press conference at Jamaica Hospital Medical Center, adding that the suspect was “carrying an imitation firearm.”

A sergeant was also shot in the leg during the incident.

The shooting took place at around 6:10 p.m. after police received two 911 calls reporting an armed robbery in progress at a Queen’s T-Mobile cell phone store.

One of the callers reported seeing the suspect take two employees at gunpoint to the back of the store, O’Neil said.

The officers, in the vicinity on an unrelated case, responded to the call and on entering the store saw a man fitting the suspect’s description pointing at them what appeared to be a firearm.

The officers discharged their weapons and Det. Brian Simonsen, 42, was shot in the chest and killed, O’Neil said.

Both officers were rushed to Jamaica Hospital Medical Center where Simonsen was pronounced dead.

The suspect, a 27-year-old male, was shot multiple times and taken to the New York Hospital Queens. He is in stable condition.

O’Neil described him as a “career criminal.”

“Make no mistake about it – friendly fire aside – it is because of the actions of the suspect that Detective Simonsen is dead,” he said. 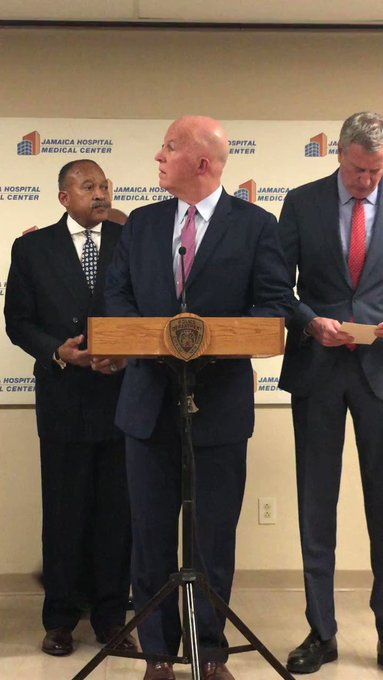 UPDATE: @NYCMayor and @NYPDONeill deliver remarks on this evening’s police involved shooting in the @nypd102pct in Queens.

New York Mayor Bill de Blasio said, “It was a difficult, painful night for our city.”

They also visited the injured sergeant who is in stable condition.

“We wish him a speedy recovery,” de Blasio said. “So clear – his bravery was so clear but his pain for having lost a colleague was so clear as well.”

The 19-year veteran is the first fallen officer from a gunshot wound since 2017 when officer Miosotis Familia was killed by a gunman who walked up to the passenger side of a police patrol vehicle and shot her through the window.

It is also the second time in three months that an officer has been shot following a friendly fire incident in December on Staten Island, PIX11r eported.

New York Sen. Chuck Schumer said in a tweet that “We are forever indebted to the brave NYPD detective who was killed in Queens tonight and the sergeant who was wounded. May God bless them and their families.”

We are forever indebted to the brave NYPD detective who was killed in Queens tonight and the sergeant who was wounded. May God bless them and their families.