During a visit in which he performed the traditional wreath-laying at the cemetery’s Tomb of the Unknown Soldier, Obama also gave advice to help American veterans.

Obama’s administration on Wednesday also cited efforts it has implemented recently and discussed additional reforms it seeks to improve the lives of servicemen and women after they switch from military life back to civilian life.

“Every sector, every industry, every community can benefit from the incredible talents of our veterans,” Obama added. “They are ready to serve and they will make you proud.”

“After four years at the U.S. Naval Academy and nearly seven years of active duty service, including a wartime deployment to the Middle East in 2004, I gained what I would argue is the most important and meaningful title I have ever been afforded — I am a veteran,” White House Director of Private Sector Engagement Rob Diamond said in a White House blog post Wednesday.

“I think that leaving the military is challenging … From worrying about what our next careers will be, to deciding whether to go back to school, to finding a path forward,” he added. “I know that this President appreciates that … he is reaffirming his commitment to ensuring that those who have served our country receive the benefits they have earned and deserve.” 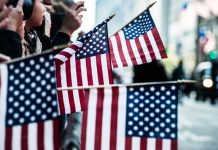