Sept. 27 (UPI) — One year after a severe flu season, medical personnel are giving it their best shot to reduce hospitalizations and deaths by giving a boost to vaccines.

The Centers for Disease Control and Prevention are aiming for significantly higher rates of flu vaccination for the 2018-2019 flu season following the most deadly season since 1976, the first year total seasonal flu deaths were reported.

Last year there was an estimated 900,000 hospitalizations, and more than 80,000 deaths, according to new data released by the CDC on Thursday. The previous high for regular flu season deaths was 56,000.

The number of people vaccinated dropped last year by 1.1 percentage point to 57.9 percent — far below the goal of 80 percent.

With the new vaccine now available, U.S. government officials led by example by getting their own flu shot in front of assembled media Thursday in Washington, D.C.

“I did not feel a thing,” Adams said after being vaccinated. “I know people get squeamish about needles. “We want everyone to to get immunized now — before Halloween.”

The CDC recommends everyone age 6 months and older get vaccinated against the flu each year.

In addition to standard injected forms of the vaccine, the CDC earlier this year reinstated its recommendation for Flumist Quadrivalent. AstraZeneca, the drug maker, announced Tuesday it began its first shipments of the mist. It can be used in children, adolescents and adults ages 2 through 49.

Adams said estimating potential infections and deaths for the upcoming flu season is answering the wrong question because “we look at every season as a bad season. We want to ensure it won’t be a bad season.”

“The damage continues even after recovery from acute illness,” Swanson said. “It’s why many people feel wiped out for two weeks after stopping coughing. It can affect blood vessels in the brain.”

He said the primary consequence is increased risk from heart attacks and strokes, as well as a secondary concern for older people who are more vulnerable to disability and death.

“My wife’s grandmother was going along OK,” Adams said. “She got sick. Maybe it was a cold, maybe the flu. It lead to hospitalization, then she was put into a nursing home. Just a short time later died.”

The CDC estimates that the overall efficacy of the seasonal flu vaccine for last season — not needing to seek medical care — was around 40 percent. For the H1N1 strain, the effectiveness was 67 percent.

“Even if you get flu after having received the vaccine — the vaccine is not perfect — you have a less severe illness,” Schaffner said. “Give the vaccine credit for softening the blow.”

Last year 155 million vaccine dose were administered — with between 163 and 168 million available this year, including nasal spray.

The panelists noted that the vaccine prevents the spread of the flu, preventing greater illness and hospitalization. And risk of spreading flu can be reduced with better hygiene and staying home from work and school when sick, he said.

“I am the father of three young children,” Adams said. “Whenever friends come by, I ask them are you vaccinated. It is healthy kids out there dying from the flu. Just one flu death is too many.”

Of the deaths, 180 were children. And the CDC believes the number is thought to be underestimated, as not all flu-related deaths are reported. During most influenza seasons, about 80 percent of reported pediatric deaths occur in children who have not been fully vaccinated against flu.

Swanson noted children are especially receptive to strong response from the vaccine.

The vaccination rate for children was 60 percent. Vaccination coverage remained highest in this age group — children 6 months to four years was highest, at 67.8 percent, and lowest among children ages 13 to 17 years, at 47.4 percent. Among pregnant women the rate it was 49 percent.

“It is critically important to prevent pregnant women from getting the flu,” said Dr. Laura Elizabeth Riley, who is director of obstetrics and gynecology infectious disease at Massachusetts General Hospital. “By getting into the baby’s system, it protects babies for the first six months of life.”

Older adults and those with certain chronic health conditions, including heart and lung disease, diabetes and obesity, are also at high risk of serious flu complications. According to the CDC, about 70 percent of estimated hospitalizations and 90 percent of deaths occurred in that age group.

Officials noted flu vaccine is available at numerous places, including drugstores, grocery stores and at many workplaces.

“There is no excuse not to get it,” Adams said, adding it is free among those on Medicare and Medicaid as well as offered at no charge by employers. 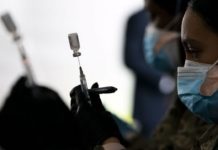