An explosion went off near the leader’s convoy Tuesday morning, officials said. Hamdallah and Palestinian Intelligence Chief Majid Faraj, who’d accompanied him, were not hurt.

Five others were hurt in Tuesday’s blast, but their injuries were minor.

Hamdallah, who’d visited Gaza for the opening of a waste treatment facility, returned shortly after the attack. He also met with senior officials about stalled reconciliation talks between his group and Hamas.

“I will return to Gaza despite what happened today and I call on Hamas to allow the government to effectively control the Gaza Strip,” Hamdallah. “What happened today will not stop us from continuing reconciliation efforts.”

Hamas was initially blamed for the explosion, but after meeting the group’s leader, the two accused Israel and “collaborators” are responsible for the assassination attempt. 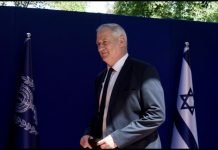