June 18 (UPI) — A building collapsed after catching fire Saturday in Philadelphia, trapping five firefighters, one of whom died, and a city inspector, local authorities said.

Philadelphia Fire Department Deputy Fire Commissioner Craig Murphy told reporters at a media briefing that the fallen firefighter was a 27-year veteran of the department, adding that he couldn’t provide the firefighter’s name until the family was notified.

“It’s going to be a rough few weeks coming up,” Murphy said at the briefing near the collapse site in the Fairhill section of North Philadelphia. “You can’t predict this …This was just a catastrophic accident that [has] really hurt our department.”

The blaze broke out around 2 a.m. at a three-story restaurant and residential building in the city’s Fairhill section, and the building collapsed at 3:24 a.m., after the fire had been put out.

Four firefighters and a city building inspector, who were trapped at the time of the collapse, were all taken to Temple University Hospital, Murphy said.

The building inspector has since been released from the hospital, Murphy added.

One of the firefighters was able to escape by jumping from the second story of the rubble, and others were pulled out of the building at various times, he added.

Murphy also said that the incident doesn’t look suspicious at this point, but the fire marshals will work to determine cause.

“You can’t predict this,” Murphy said. “This was just a catastrophic accident that really hurt our department.”

Philadelphia Mayor Jim Kenny said in a Twitter post he was “grieving with the members of the @PhillyFireDept and all @PhiladelphiaGov who lost one of our own in the line of duty today.”

Two families were displaced by the collapse and will be relocated to new housing, the Red Cross said, CBS Philly reported.

The restaurant that caught fire is a popular pizza shop that appears to have had construction done without permits in recent years, according to The Philadelphia Inquirer. 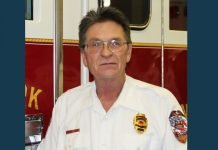