PHILADELPHIA, Aug. 25 (UPI) — A man once accused of trying to jump the White House fence was shot dead Tuesday after he allegedly attacked a deputy sheriff with a knife at a county courthouse.

Curtis Smith, of Coatesville, Pa., was pronounced dead after the encounter at the Chester County Justice Center in West Chester, Pa. He was shot by another deputy at the courthouse, located about 35 miles outside Philadelphia.

In a post on Facebook, Chester County District Attorney Tom Hogan wrote, “There was an incident in the lobby of the Chester County Justice Center. Sheriff’s deputies neutralized the threat and the area is secure. The Justice Center will be closed to the public for the rest of the day. More details will follow.”

Smith, 33, was arrested in March after allegedly climbing the outer perimeter stone wall of the White House. 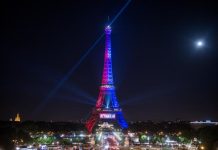