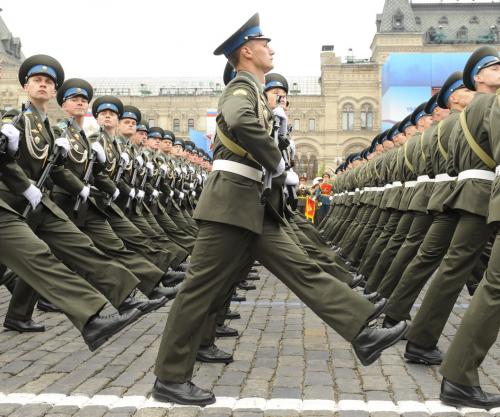 MOSCOW, May 9 (UPI) — Thousands of Russian troops marched across Moscow’s Red Square Saturday in the military parade marking the 70th anniversary of victory over Nazi Germany.

Under the watchful eye of President Vladimir Putin and about 30 foreign leaders, including Chinese President Xi Jinping, some 16,000 soldiers, 200 armored vehicles and 150 jets and helicopters took to Red Square as hundreds of thousands of onlookers carried photographs of relatives who took part in the war. This is expected to be the last major anniversary when a large number of aging World War II veterans are still alive.

Putin paid tribute to those who died in the conflict and Nazi concentration camps with a moment of silence. He said the veterans at the celebration were the “main heroes” of the memorial.

“Today your children or grandchildren are grateful to you for this victory, working for the future of the country,” he said.