After the decision was announced Saturday, the government critic urged nationwide protests on Jan. 28 and to boycott the election on March 18.

“We don’t recognize elections without competition,” Navalny, who did not attend the hearing in Moscow, posted on Twitter.

His lawyer, Ivan Zhdanov, told Russia’s news agency Interfax the case will be appealed to the European Court of Human Rights.

On Monday, Russia’s Central Election Committee said Navalny, 41, was not eligible to run for public office until at least 2028 because of a fraud conviction.

After being convicted in February by a court in Kirov, Novalny said he planned to run and was eligible because only those in prison are banned, and he is on probation for six years in the $500,000 embezzlement scheme in 2014. The activist also has a five-year suspended sentence in 2013 for a fraud scheme.

Navalny says the charges were fabricated to prevent him from facing Vladimir Putin in the presidential election in March. Putin, who has been in power for 18 years, has an approval rating of 80 percent and said most of the current opposition figures were more focused on “making noise” instead of ways to benefit the country.

Navalny is polling at around 2 percent but said he would defeat Putin in “honest elections” if he could freely promote his anti-corruption policies.

On Sunday, thousands rallied in support of Navalny near Moscow.

He has been placed under administrative arrest for several days for organizing unauthorized public gatherings. 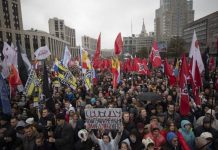 20,000 rally in Moscow for release of jailed protesters 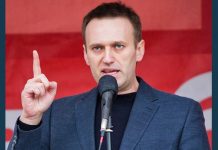 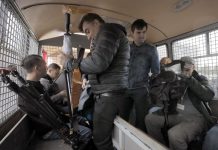