Sept. 25 (UPI) — A seventh suspect was arrested Monday in connection to the terrorist bombing of a London subway this month, authorities said.

Officials said a 20-year-old man was arrested in Cardiff, and that police are holding him at a south London police station while they search properties in the city. The arrest was carried out by officers from the Metropolitan Police’s Counter Terrorism Command.

Several other people have been arrested since the attack, but a 17-year-old boy and two men were released late last week.

Ahmed Hassan, 18, remains in custody with two other men.

Hassan was charged with attempted murder and causing an explosion likely to endanger life or cause serious injury to property. He will appear in court early next month.

The train attack occurred Sept. 15 as a train departed from the Parsons Green subway station and caused a fire.

Thirty people were injured in what was the fifth attack on London this year.

Police said they will continue to investigate locations in Surrey and Cardiff. Searches in Hounslow, Newport, and Stanwell have been completed. 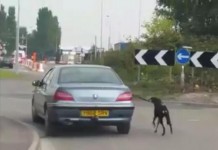