April 17 (UPI) — Police on Saturday were searching for two suspects wielding sledgehammers in a brazen smash-and-grab robbery of a jewelry store at an upscale southern California mall.

The manhunt stems from two male suspects robbing Kay Jewelers at Brea Mall in Orange County, Calif., just before 7 p.m. on Friday by smashing the glass counters with hammers before fleeing the scene, police said in a Twitter post last night.

The suspects, who wore black hoodies and red sweatpants and facemasks, were Black males in their late teens to early 20s, and carried a single red backpack between them, police said in an update on Twitter, with a photo early Saturday.

Initially, some witnesses thought they heard firearms, but it was actually the sound of “the hammers striking the glass,” police said in an earlier tweet.

There were no injuries reported.

Among the items stolen were gold chains, but the value and extent of damage was not immediately available.

Earlier this month, two men targeted another Kay Jewelers at Westminster Mall and stole over $200,000 worth of jewelry in a smash-and-grab robbery.

Police are investigating to see if the two robberies are connected. 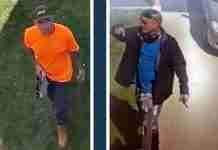