SITKA, Alaska, Aug. 19 (UPI) — Three men are missing and presumed dead after a landslide in the Alaskan city of Sitka, authorities said Wednesday.

Multiple landslides began around 10 a.m. Tuesday following heavy rains in Sitka, which sits on an island to the southeast of the Alaskan mainland, 600 miles from Anchorage. A sinkhole also developed, prompting Alaska Gov. Bill Walker to declare a state of emergency in the city.

Four people from the same impacted neighborhood were initially declared missing as first responders evacuated others from affected areas amid damage to private property, roads and a local industrial park.

A 5:30 p.m. Tuesday, a Sitka spokeswoman corrected the number of missing people to three and listed their names as William Stortz, 62, Elmer Diaz, 26, and Ulises Diaz, 25. They were presumed dead at 9 p.m. The men were working in the area when the landslide struck.

In total, the city ordered the evacuation of about 20 to 30 homes. Walker plans to visit the city Wednesday.

Carpenter Chris Harshey told the local Daily Sitka Sentinel that he was working on a home when the slide occurred. He was jarred by the crackling and crumbling sounds he heard, which prompted him to go outside and investigate. He saw the slide destroy a home nearly 200 yards above him and damage another.

The National Weather Service observed 2.57 inches of rain over a span of six hours Tuesday from the Sitka Airport.

A representative of the Alaska Division of Homeland Security and Emergency Management added that this kind of landslide is typical for the city as the mountainsides get saturated with the heavy rainfall. 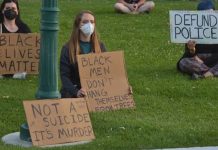