July 5 (UPI) — Tropical Storm Elsa made landfall in Cuba Monday evening while continuing on a path for the United States.

Elsa was carrying maximum sustained winds of 50 mph while moving northwest at 13 mph.

“On the forecast track, Elsa is expected to continue to move over west-central Cuba for the next several hours, move into the Florida Straits this evening and pass near the Florida Keys early Tuesday,” the NHC said. “Elsa is then forecast to move near or over portions of the west coast of Florida on Tuesday and Wednesday.”

The storm is forecast to bring rainfall of up to 5-10 inches with an isolated maximum of 15 inches in some areas across portions of Cuba on Monday night resulting in “significant flash flooding and mudslides.”

Else is expected to restrengthen some after moving over the southeastern Gulf of Mexico.

A tropical storm warning was in effect for the Cuban provinces of Cienfuegos, Matanzas, Villa Clara, Mayabeque, Havana and Artemisa as well as in the Florida Keys from Craig Key westward to the Dry Tortugas and the west coast of Florida from Flamingo northward to the Swannee River.

A tropical storm watch was in effect in the Florida Bay and North of the Suwanee River to Indian Pass.

Elsa is the fifth named storm of the 2021 Atlantic hurricane season, and is the earliest to arrive. Last year, Tropical Storm Eduardo formed on July 5.

The other storms that preceded Elsa were Ana, Bill, Claudette and Danny. All were tropical storms. 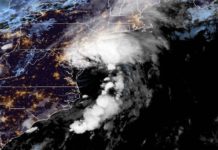