Matthew Doherty, the executive director of the U.S. Interagency Council on Homelessness, tweeted that the administration had asked him to leave his post, which he had held since April 2015. The Washington Post also obtained an internal email from Doherty to colleagues saying the administration had “told me to pack up my things and go.”

“As Tweets from faster fingers than mine have been hinting, today was my last day in service as Executive Director at @USICHgov, at the administration’s request (as is their right.),” Doherty wrote on Twitter on Friday afternoon.

The administration has not commented on Doherty’s termination.

In recent months President Donald Trump has commented repeatedly on the homelessness problem, saying it “hurts the prestige” of cities like San Francisco and Los Angeles. Administration officials have also discussed razing tent camps and rehabilitating government buildings to use as shelters.

In late October, Rep. Maxine Waters, D-Calif., chair of the House Financial Services Committee, wrote a letter asking the administration to reveal its plans to address homelessness in California.

“Specifically, what role would the United States Interagency Council on Homelessness (USICH) play in your effort?” she wrote.

The USICH is an independent federal agency within the U.S. executive branch that leads the implementation of the federal strategic plan to prevent and end homelessness. It was created in 1987.

Before joining USICH, Doherty held positions at the Corporation for Supportive Housing, the San Diego Housing Commission and the King County Housing Authority in Washington state. 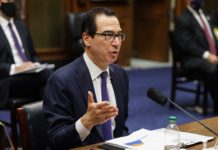