The Russian Embassy said Putin welcomed the call and will accept aid if it’s needed. Putin said the Russian military is working to contain the fires.

The Siberian fires are so large they can be seen from space. Images from the European Space Agency this week showed large amounts of smoke coming from the fire areas in Kemerovo, Tomsk, Novosibirsk and Altai.

“The Emergencies Ministry, the Federal Service for Hydrometeorology and Environmental Monitoring and the Federal Forestry Agency provided forecasts to the Siberian regions but regional authorities have failed to take enough measures to prevent wildfires and extinguish them,” Russian emergency official Sergei Abanin said.

“Let me put it straight: local and regional authorities failed to tackle the situation so the federal government was forced to respond to it,” Abanin said.

The White House said the two leaders also discussed trade during Thursday’s call, which occurred amid heightened tensions between Washington and Moscow — primarily over Kremlin interference in the 2016 U.S. presidential election.

“The Russian president viewed Trump’s offer as a sign that fully-fledged bilateral relations could be restored in the future,” the Kremlin said Wednesday.

Hundreds of #wildfires have broken out in #Siberia, some of which can be seen in this 28 July @CopernicusEU #Sentinel3 image. Almost 3 million hectares of land are estimated to have been affected, according to Russia’s Federal Forestry Agency. Read more: https://www.esa.int/spaceinimages/Images/2019/07/Siberian_wildfires … 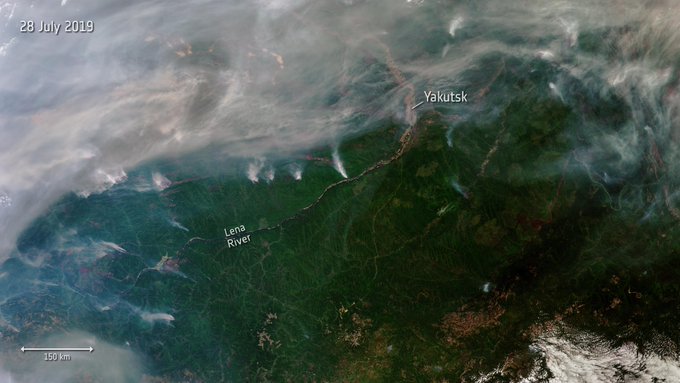