Lushsux added bubble quotes to the artworks, including an image of actor Morgan Freeman with words from civil rights leader Nelson Mandela: “We know too well that our freedom is incomplete without the freedom of the Palestinians.”

Another political mural shows Hillary Clinton asking, “what happened?” — to which Trump answers, “I happened.”

One mural depicts Trump writing a letter to rapper Eminem, using the artists own lyrics after the singer’s viral takedown of the president earlier this week.

Zuckerberg, meanwhile, was cited as the “Founder of Myspace.” The billionaire and philanthropist, however, actually founded Facebook.

Many of the murals contain images from the animated sitcom Rick and Morty. Characters from the show often give politically charged messages, including the idea of solving the “whole damn Middle East crisis.” 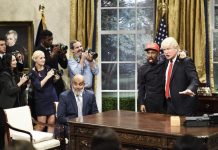 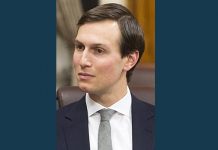 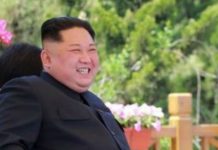 Trump, Kim arrive in Singapore ahead of N.K.-U.S. summit