March 4 (UPI) — Turkish warplanes attacked pro-Syrian government forces on Saturday in the Syrian enclave of Afrin, killing 36 fighters, according to the Syrian Observatory for Human Rights.

The strikes were the third attack on pro-Syrian government forces in the area in less than 48 hours. Fourteen pro-government fighters were killed Thursday and four on Friday by Turkish airstrikes, according to the monitoring group, which is based in Britain.

The Turkish-led Syrian opposition fighters have been advancing since launching the assault on Afrin on Jan. 20. As of Saturday, Turkish-led forces control more than 20 percent of the enclave after seizing Rajoin in the northwest part of the region.

On Feb. 24, the U.N. Security Council unanimously approved a 30-day cease-fire in Syria after a week of intense bombing by the Syrian government killed 500 civilians and wounded hundreds more.

In the resolution, all parties were asked to “cease hostilities without delay” for at least 30 days to allow the “safe, unimpeded and sustained delivery of humanitarian aid and services and medical evacuations of the critically sick and wounded.”

Mohammed Faraj, a commander of pro-Syrian government forces in Afrin, accused Turkey of not “complying with the truce … by shelling villages and civilians indiscriminately.”

Faraj called on the Syrian leadership and Russia “to see these violations and to stop these attacks and the bombing targeting the region, especially the civilians.”

More than 2,200 terrorists have been captured dead or alive or surrendered in the Afrin region of Syria as part of Turkey’s ongoing military operations there, authorities said Thursday. 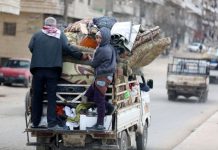 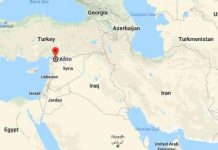 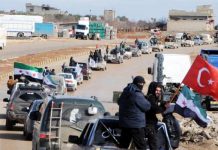