April 9 (UPI) — Two managers at a high-end gym in South Florida died from injuries sustained after a fired worker shot them and then turned the gun on himself, officials said Sunday.

Gunman Abeku Wilson, 33, was fired as an Equinox trainer earlier that day for “workplace violence,” police said. He went home, got a semi-automatic handgun and returned to the gym looking for Ackerman, police said.

“Our entire Equinox family experienced a terrible tragedy yesterday when a former trainer walked into our club in Coral Gables and shot two members of our team,” read the Equinox email to club members. “We are deeply saddened to inform you that our General Manager, Janine Ackerman, and our Fitness Manager, Marios Hortis, both passed away as a result of their injuries. Our sense of loss is too profound for words.”

Ackerman, who worked for Equinx for nearly two years, was described in the email as “a kind and caring soul, a person we all loved and will deeply miss.” Ackerman previously handled guest services for the 1,600-room renowned Fontainebleau in Miami Beach.

Hortis’ “generous spirit and warm demeanor made him an always welcome presence in our world, one that will be sorely missed,” the email said. He worked for the gym for more than six year.

Eveliny Bastos-Klein had a training session with Wilson shortly before the shooting took place at 12:55 p.m.

“He did not seem unusual,” she said to the Miami Herald. “Not distracted. I didn’t notice anything amiss.”

She said Wilson “as always, he was great. Just very professional and polite and calm.”

But Marc Sarnoff, a former Miami city commissioner, told the Miami Herald, that Wilson wasn’t clean shaven, looked off and seemed to slur his words.

A profile on a modeling website from 2014 lists his height as 6-foot-2 and his weight as 175 pounds. He is a native of Boston whose father was from Ghana and his mother from the United States. He graduated from the University of Miami with a bachelor’s degree in Business Administration. 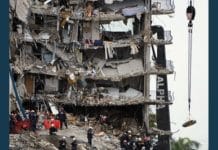 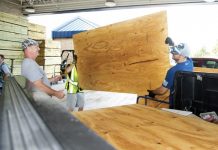 Investigators working to determine cause of South Florida explosion