June 30 (UPI) — COVID-19 has killed nearly 130,000 people in the United States since the start of the pandemic, which includes a total caseload of almost 2.7 million, updated figures showed Tuesday.

According to Johns Hopkins University, 2.682 million cases have been reported in the United States over the last four months. The death toll is listed at just over 129,500.

The United States has, by far, the most reported cases of any nation in the world. Brazil, listed second, has reported 1.3 million.

The state with the most coronavirus deaths is New York, with 31,400, followed by New Jersey with nearly 15,000 and Massachusetts with about 8,100.

The university noted more than 70,400 recovered patients in New York and 31,000 in New Jersey.

The new figures follow rises in cases in several states, including Florida and Arizona.

Miami Beach, a popular tourist destination in South Florida, on Tuesday introduced a mandatory order for face coverings in public.

Mayor Dan Gelber said the move is necessary due to a lack of “unity of purpose” in his city.

“We don’t have a lot of tools left in the kit right now, so we’re trying everything we can to stop this spread and reverse what is a very enormous spike in our community and in our state,” Gelber told CNN.

In New York, a top official at Goldman Sachs said Tuesday such an order nationwide could spare the U.S. economy from a 5 percent contraction this year, as projected.

Chief Economist Jan Hatzius said a national mask order could lead to 15 percent more Americans wearing masks in public, which he said would significantly lessen the need for new restrictions and economic fallout. 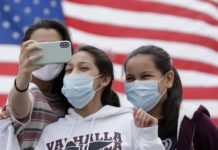 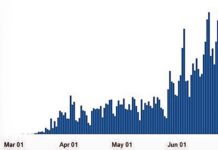 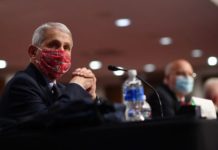