The court’s one-paragraph decision upholds the voting rights the governor restored last month to people who have served their time and completed their probation, McAuliffe’s office said.

“I am pleased that the Supreme Court has dismissed the case Republicans filed in their latest attempt to prevent individuals who have served their time having a full voice in our society,” Gov. McAuliffe said in a statement.

State Republicans have contended McAuliffe was making a purely political move during an election year with Virginia’s felons largely African-American and likely to vote Democrat.

Republicans said they would now move to the Legislature to pass bills that would limit McAuliffe’s ability to grant such clemency. 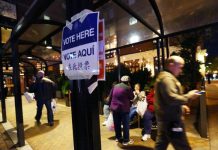 Florida to vote on restoring voting rights to felons