Sept. 8 (UPI) — Supreme Court nominee Brett Kavanaugh underwent four days of questioning this week during his Senate confirmation hearing, and though he frequently said he wouldn’t reveal how he’d vote on potential legal cases, he did address concerns on some key issues.

Kavanaugh has served on the bench of the Washington, D.C., Circuit Court of Appeals since 2006 and if confirmed will replace Supreme Court Justice Anthony M. Kennedy, who announced his retirement in June.

The nomination represents a potential shift in the court’s balance, as Kennedy often served as a swing vote who sometimes sided with a different political ideology — and that has some Democrats worried he would work to undo key rulings like Roe vs. Wade.

On Wednesday, Kavanaugh told the Senate judiciary committee he considered the landmark abortion ruling as settled, though he declined to promise he would never vote to reverse it.

“As a general proposition I understand the importance of the precedent set forth in Roe vs. Wade,” he said.

On Thursday, though, a memo he wrote in 2003 revealed he believed the ruling could be reversed.

“I am not sure that all legal scholars refer to Roe as the settled law of the land at the Supreme Court level since Court can always overrule its precedent,” the memo said.

Kavanaugh also addressed previous writings in which he said presidents should not be criminally investigated until after they are out of office. President Donald Trump, meanwhile is under scrutiny as part of special counsel Robert Mueller‘s probe into possible interference in the 2016 presidential election.

Trump has repeatedly slammed the probe and Attorney General Jeff Sessions for recusing himself from the investigation.

“We’re in a moment … where the president has shown contempt for the federal judiciary unlike any president we can recall,” Sen. Richard Durbin, D-Ill., said during Thursday’s hearing. “He has shown dis­respect for the rule of law over and over again. He has repeatedly ridiculed the attorney general of the United States, whom he chose. … And that’s why your nomination is different than any.”

Kavanaugh said he values a separation of powers.

“I’ve made clear in my writings that a court order that requires a president to do something or prohibits a president from doing something is the final word in our system,” he told the committee.

On gun control, Kavanaugh dissented in a 2011 case that upheld a Washington ban on assault weapons. He said he voted in line with a 2008 Supreme Court ruling that said owning a handgun was a constitutional right.

“Most handguns are semiautomatic — something not everyone appreciates,” Kavanaugh said Wednesday. “I have to follow the precedent of the Supreme Court as it’s written, and that’s what I tried to do in that case.”

“Senator,” he said, “of course the violence in the schools is something we all detest and want to do something about, and there are lots of efforts, I know, underway to make schools safer. I know at my girls’ school they do a lot of things now that are different than they did just a few years ago in terms of trying to harden the school and make it safer for everyone.”

On the Affordable Care Act, Kavanaugh wouldn’t promise senators that he would uphold the landmark healthcare law pushed by former President Barack Obama or its protections for pre-existing conditions.

“I can’t give assurances on a specific hypothetical,” he told the committee Wednesday, adding that a truly independent judge wouldn’t reveal how they would vote ahead of reviewing any case.

Though, again, Kavanaugh didn’t indicate how he would vote in a potential religious liberty case, he made his support for such freedoms clear after questioning from Sen. Ted Cruz, R-Texas, on Wednesday.

Religious liberty is “important in the original Constitution; even before the Bill of Rights, the framers made clear in Article 6, ‘no religious test shall ever be required as a qualification to any office or public trust under the United States’. So that was very important, in the original Constitution, that the framers thought it very important that there not be a test to become a legislator, to become an executive branch official, to become a judge … the framers understood the importance of protecting conscience, it’s akin to the free speech protection in many ways … If you have religious beliefs, religious people, religious speech, you have just as much right to be in the public square, and to participate in the public programs, as others do.”

Kavanaugh said he dissented in a 2017 case upholding the Federal Communications Commission’s authority to create net neutrality rules based on the “major decisions — that Congress should rule on the subject first.

“It’s OK for Congress to delegate various matters to the executive agencies to do rules,” he said. “But on major questions of major economic or social significance, we expect Congress to speak clearly before such delegation, and that’s what had not happened, in my view, with respect on net neutrality and I felt bound by precedent.”

Obama-era net neutrality laws protect users and businesses from being charged higher rates for faster connections or access to certain websites. Under Trump, the FCC voted to undo the law. 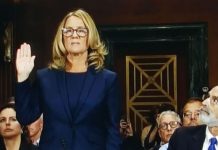