MARBLE FALLS, Texas, Sept. 9 (UPI) — Two high school football players accused of intentionally tackling a referee during a game in Texas may have done so because the official allegedly used racial slurs during the game, school officials said.

Two John Jay High School students playing in a game against a team in Marble Falls, Texas, about 90 miles north of San Antonio, tackled a referee Friday in an incident caught on video.

Both students were suspended from the team and school after the incident, and each could face criminal charges — one for charging the referee from behind and the second for spearing at the referee with his helmet.

The students are minors so their names have not been released.

The motive was unclear until Tuesday, when Texas school officials suggested the players were angry about calls and alleged racial slurs coming from a referee and told their assistant coach Mack Breed about it.

Northside Independent School District Superintendent Brian Woods and spokesman Pascual Gonzalez said the coach then allegedly told the students the umpire “needs to pay for cheating us.” The coach’s directive is believed to have sparked the violence.

The players, the assistant coach and now the referee could potentially be in hot water as school officials plan to file a complaint against the game official for dishing out racial slurs. Head coach Gary Gutierrez has denied having any knowledge of the conversation between the students and the assistant coach.

Meanwhile, John Jay High School will continue its football schedule, claiming it is unfair to make 200 students in the football program pay for the actions of two.

On Tuesday, Woods also said the school district has “formal processes” it will follow to resolve the issue, which involves taking statements from all those involved.

“It is important that emotions stay out of the process and that we act on facts,” he said.

NISD said the consequences for assault can vary from placing a student in a discipline-centric setting, to expulsion from the district and assignment to a juvenile justice school run by Bexar County.

NISD’s top athletic official, Stan Laing, said that even if the comments were made, they would not justify the violence that allegedly took place. 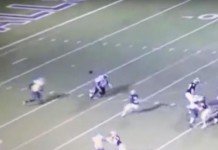