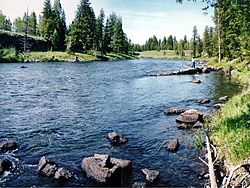 Johnson drowned after his canoe capsized and he was trapped on a log jam on the Henry’s Fork of the Snake River, according to report.

Deputy Koyle Parkinson said he responded to a report of people screaming down river. Dispatch advised him that everyone was accounted for but there was one male that was unconscious and not breathing.

He reported witnesses said about 15 minutes into the canoe float, the family hit a rough patch of water. Johnson’s canoe, which also contained his wife, Hannah, and a nine-year-old cousin, hit a log jam that capsized the boat. Sjon got snagged up in the log jam and was suspected to have been underwater for about ten minutes.  The 9-year-old said Johnson helped her escape the debris and then she washed down river and was picked up by family members.

Sjon was pulled out of the water by Joel and Crista Galbraith and placed on a log in the middle of the river. The officer told Joel to start administering CPR, but it was unsuccessful.

The Fremont County Sheriff’s office, Search and Rescue and EMS along with Madison County’s Sheriff Department responded to the scene; the incident report  shows first responders got to Johnson in a drift boat. He was taken to an island where emergency personnel began CPR again. After approximately 45 minutes the EMT’s did get a pulse back. Johnson was then rushed to Madison Memorial Hospital in Rexburg. He was later pronounced dead at the hospital.

Emergency personnel helped the remaining family members get off the log jam.

We will have more information as it becomes available.