Aug. 26 (UPI) — An explosion occurred on Thursday outside Hamid Karzai International Airport in Kabul, where the United States and other nations have been working to evacuate citizens and Afghan civilians for the past week — and where authorities were bracing for a possible terrorist attack.

Earlier Thursday, the United States, Britain and Australia had warned citizens to stay away from the airport due to “credible threats” warning of an impending terrorist attack by militants of the Islamic State-Khorasan Province, an IS offshoot in Afghanistan.

Pentagon spokesman John Kirby said there was an explosion at the airport, but the extent of damage or casualties wasn’t immediately known.

“We can confirm an explosion outside Kabul airport,” Kirby tweeted. “Casualties are unclear at this time. We will provide additional details when we can.”

CNN reported there were injuries to Afghan civilians.

Some officials had previously said the attack could happen within a matter of “hours.”

The threat of an attack emerged as the Western nations race to meet a Tuesday deadline to evacuate personnel and vulnerable Afghan civilians.

“Because of security threats outside the gates of Kabul airport, we are advising U.S. citizens to avoid traveling to the airport and to avoid airport gates at this time unless you receive individual instructions from a U.S. government representative to do so,” the U.S. Embassy in Afghanistan said in a statement late Wednesday.

Before the threat, the United States and other countries had urged citizens to find a way to the airport so they can be airlifted out of Afghanistan.

A British advisory urged citizens and Afghan supporters to take “other means” to leave the country if they can do so safely.

“The security situation in Afghanistan remains volatile,” the British advisory said. “There is an ongoing and high threat of terrorist attack.”

“Be aware of the potential for violence and security threats with large crowds. There is an ongoing and very high threat of a terrorist attack.”

“The credibility of the reporting has now reached the stage where we believe that there is a very imminent, highly lethal attack possible within Kabul,” Heappey told BBC News on Thursday.

Meanwhile, the White House said Thursday that about 13,400 people were evacuated on Wednesday, some on U.S. military flights and others on coalition aircraft.

Since Aug. 14, the U.S. military has evacuated and helped evacuate more than 95,000 people, the White House said. 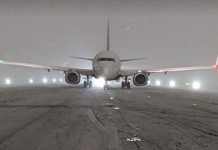