LAYTON, Utah, April 12, 2020 (Gephardt Daily) — Police were called out on a report of domestic violence at an apartment complex in Layton on Sunday night.

Sgt. John Ottesen, with the Layton Police Department, told Gephardt Daily that officers were dispatched at about 7 p.m. to the area of 1600 N. Angel St., where the 32-year-old man was reported to be assaulting the 37-year-old woman.

“Another party got involved to protect the girlfriend, and the suspect cut his hand,” Ottesen said. “He got a pretty good cut on a finger, a defensive wound that required stitches.”

Otteson said the man who intervened is about 18 or 19 years old and possibly sustained other cuts during the incident, but nothing life-threatening. He was taken to the hospital by a friend and was interviewed there by an officer.

Scanner traffic indicated that the young man may have lost part of his finger during the altercation, but Ottesen was unable to confirm that.

The woman had no visible injuries other than “some abrasions and cuts from falling on the ground” during the assault, Ottesen said.

“The boyfriend was aggressive toward officers, so a Taser was deployed” and he was then taken into custody, Ottesen said, adding that the suspect was “likely under the influence of alcohol,” which could be smelled on him.

Crime scene investigators also responded to the apartment complex, and the incident is still under investigation Sunday night. 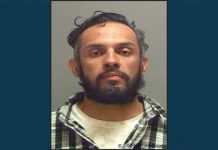 Police: New insights in death of woman killed by Layton man she met on Tinder app