NEVADA, March 28, 2020 (Gephardt Daily) — More details have been revealed about the man suspected of the fatal shooting of a Nevada Highway Patrol officer on Friday morning.

Sgt. Ben Jenkins, 47, was shot and killed moments after he stopped to offer assistance to a motorist stopped at 5:54 a.m. on U.S. 93 near Ely.

“During this contact, the motorist opened fire on Sgt. Jenkins, who was struck and killed,” Col. Daniel Solow, Nevada Highway Patrol, said at a Friday afternoon news conference.

The motorist stole Jenkins’ uniform and patrol car, Solow said. After a search lasting nearly four hours, suspect John Dabritz, 65, was located near the crashed patrol car and was taken into custody.

After being medically cleared, Dabritz was booked into the White Pine County Detention Center, a 40-bed facility in Ely, Nev., where he remains in custody. The exact charges in the case will be determined pending further investigation, Solow said.

Multiple Utah and Nevada agencies helped in the search. The patrol car and suspect ultimately were found near Cherry Creek, a small town about 100 miles from the site where Jenkins was killed, Solow said.

Dabritz has an extensive criminal history dating back to 1973, Solow said. He did not reveal the nature of the offenses.

The Las Vegas Review-Journal conducted an interview with Haydee Dabritz, the ex-wife of John Dabritz, who characterized her ex ” … a mentally ill man with a history of alcoholism who ‘seemed like he had gone completely off the rails’ in recent days,” the article says.

Other Stories of Interest:  Missing person from Sandy shot, killed in Tooele County

Jenkins was a respected law enforcement professional, a husband, a father of four and the grandfather of five, a NHP statement says.

“He was just doing his Highway Patrol job,” Solow said. “He saw motorist stop at the side of the road, in remote area of the state and he stopped to check on his well being.”

“Our hearts go out to the Jenkins family, and my heart goes out to all of my troopers,” he said. “This is the worst tragedy that can happen in a law enforcement officer’s career, to lose one of our own, to lose someone we know, that we were with, that is dedicated to serving others. It’s devastating to all of us on the Highway Patrol.

“The outpouring of support from our community has been tremendous. throughout the state and across the nation. We’ve received messages of support from all parts of this country and that’s very overwhelming as well.”

Details concerning a memorial service for Jenkins are pending. Gephardt Daily will have more information as details become available. 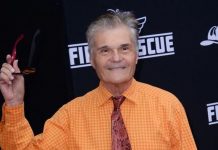 Fred Willard, of ‘Everybody Loves Raymond, ‘Best in Show,’ dead at 86