Jan. 6 (UPI) — Republicans in the Pennsylvania state Senate have refused to swear in a Democratic colleague who won re-election in November, and they took control of the proceedings from the state’s lieutenant governor, who objected to the move.

Pennsylvania state Sen. Ryan Aument on Tuesday tabled a motion to prevent Sen. Jim Brewster from being seated as his narrow election win in November is being contested by his Republican challenger, Nicole Ziccarelli, in the courts.

Republicans then voted to remove Lt. Gov. John Fetterman after he rejected to see the motion and was replaced by Republican Senate President Pro Tempore Jake Corman.

Democratic state Sen. Anthony Williams vociferously objected to the move, stating they were not only violating the Constitution and the commonwealth’s laws but their oath to office.

“There is nothing about this day that is appropriate — nothing,” he yelled. “We will not lay down and roll over because you got four more folks on that side of the aisle. This is about Pennsylvania, not Democrats or Republicans. This not about simply winning, it’s about protecting our democracy.”

Gov. Tom Wolf condemned the move and accused the Republican Party of spreading disinformation it used to “subvert the democratic process,” not only in the state but nationwide.

“This is a shameful power grab that disgraces the institution,” the Democratic governor said in a statement. “It is simply unethical and undemocratic to leave the district without a voice simply because the Republicans don’t like the outcome of the election.”

Brewster beat Ziccarelli by 69 votes and his victory was confirmed by the Pennsylvania Department of State, but the Republicans refused to swear him in due to Ziccarelli’s lawsuit, which questions several hundred mail-in ballots. 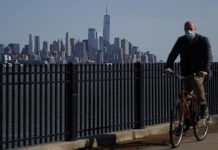