A lot has happened in the last quarter-century.

The Conservative and Unionist Party leader, May was officially anointed by Queen Elizabeth II on Wednesday as the United Kingdom’s new prime minister — succeedingDavid Cameron, who abruptly abandoned the post following Britain’s vote last month to leave the European Union.

May, 59, becomes only Britain’s second female prime minister after Margaret Thatcher — the hard-nosed and popular leader of the 1980s, who served longest in the post during the 20th Century.

In her inaugural remarks outside No. 10 Downing Street after meeting with the Queen at Buckingham Palace, May pledged to lead Britain in the post-EU era and said her government would seek to stamp out “burning injustice” wherever it could be found.

“The government I lead will be driven not by the interests of the privileged few, but by yours,” she said. “We will do everything we can to give you more control over your lives.”

Last month, May posted a message to Facebook that read, “Together we can make Britain a country that works for everyone.”

From an economic standpoint, the former home secretary also said her decisions will be made in the interests of common Britons, not merely the rich and powerful.

“I know you’re working around the clock. I know you’re doing your best. I know that sometimes life can be a struggle,” she added.

Shortly after her official public introduction, May wasted no time in appointing Philip Hammond as chancellor to replace George Osborn — and Boris Johnson as foreign secretary.

The Prime Minister, Justin Trudeau, today issued the following statement to welcome the new Prime Minister of the United Kingdom Theresa May:

Other cabinet decisions May made Wednesday include Amber Rudd as home secretary, and the retention of Michael Fallon as defense secretary. Osborn was not offered an alternate post in May’s cabinet, news reports said.

Cameron praised May in his departing speech and said his tenure as prime minister was often marked by great challenges.

“When I first stood here in Downing Street on that evening in May 2010, I said we would confront our problems as a country and lead people through difficult decisions so that together we could reach better times,” he said. “It has not been an easy journey.”

“I am delighted that for the second time in British history the new prime minister will be a woman,” he added. “Theresa will provide strong and stable leadership in fulfilling the Conservative manifesto on which we were elected, and I wish her well in negotiating the best possible terms for Britain’s exit from the European Union.”

May’s ascension to Downing Street was received by numerous well wishes from leaders around the world — including Jean-Claude Juncker, the executive leader of the European Union, who offered his “warmest congratulations” and an invitation to discuss Britain’s exit in the very near future.. 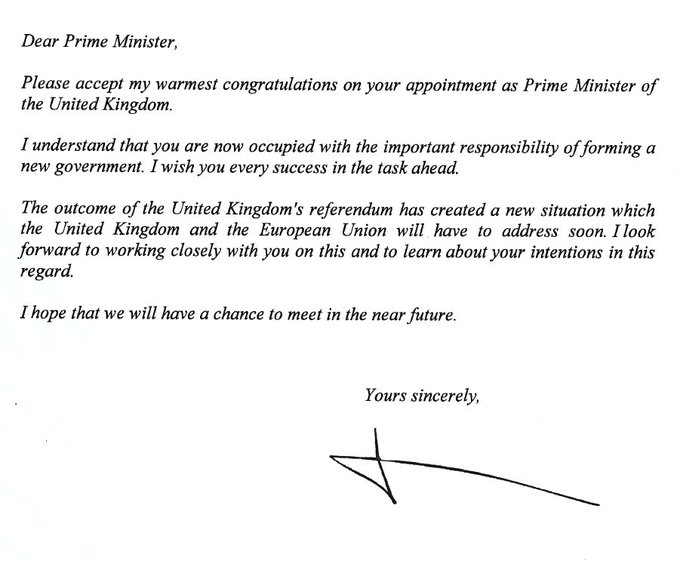 President Barack Obama, who himself will leave his leadership post in six months, did not immediately comment on May’s taking power Wednesday but spokesman Josh Earnest said the White House offers its congratulations and looks forward to working with the Conservative Party leader.

RELATEDOpinion: By riding tiger of populism, Conservatives may have destroyed the UK

A Hillary Clinton administration in the United States in January would make a similar addition to such an evolving political climate.

One of May’s friends claimed to British news media Wednesday that Britain’s new leader had actually wanted to be the United Kingdom’s first female prime minister — and was disappointed when Thatcher beat her into the history books in 1979.

“I met her on our first or second day of college, when she was 17 and I was 18,” friend Pat Frankland said. “I was aware of that ambition [to be PM] from the very early days. She used to drag me along to political lectures.”

“She was very irritated when Maggie Thatcher beat her to it.”