Person is being held without bail.

A probable cause statement filed by an officer of the Uintah County Sheriff’s Office says the charges are relate to an incident reported in January.

“Adult Probation and Parole was informed of a possible sexual exploitation of a minor due to a report made that a 9-year-old female … had possibly been given money in exchange for nude photographs. The alleged perpetrator was Dustin Person, a 34-year-old male, who had been on parole for two months due to a previous conviction involving sexual abuse of a 14 year old.

“AP&P did a home visit where Dustin’s phone was taken due to the allegations.”

The child in the current case said Person “gave her his android phone and asked that she take photos of her private parts in exchange for $5,” the statement says.

The child told officials she was afraid Person would get angry, so complied, the statement says. Investigators served a search warrant on Person’s phone, and found five photos taken on Jan. 19, which had been deleted or placed in a trash bin the next day, the statement says.

“Dustin claimed at first he did not know the photos were on the phone, but eventually agreed he had asked (the girl) to take the photos and provided her with $5,” the probable cause statement says.

Person was convicted in 2013 on multiple counts of unlawful sexual activity with a minor and of lewdness. 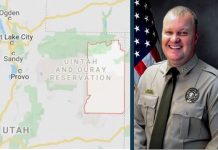