This UAPB post comes after a Saturday “camping occupation” of Washington Square, organized by the Take Shelter Coalition, of which UAPB is a member, was disrupted by Salt Lake City and Unified Police officers.

The Coalition’s stated purpose for the demonstration, which began Friday morning, was to help the homeless by “demanding shelter and dignity for every person forced to live on the streets” and to stop the alleged harassment by police.

The Coalition’s demands included a new shelter downtown, with an equivalent number of beds readily available and accessible; no arrests, tickets or harassment for campers; a change in legislation to require new centers to have more beds; and free public transit  for all who stay in shelters.

According to UAPB’s Tuesday Facebook post, the police attacked the peaceful demonstrators, and “SLCPD’s brutality, incompetence, and sheer lust for violence knows no bounds.”

It also states that the police “shot people with beanbag guns, punched people repeatedly, threw people to the ground then kicked or kneed them; they choked people, pushed, harassed, bullied, and taunted them.”

According to UAPB, the police “surrounded and abused people who stood there simply singing and chanting in response.”

The post ends by asking newly inaugurated Mayor Mendenhall to begin her term by reforming the police department from the top down, by firing Chief Brown.

The Saturday night incident UAPB is referring to began when police wearing riot gear arrived and encircled the camp, as officers with bullhorns alerted the campers that the park closes at 11 p.m., and everyone would have to disperse by that time or face arrest.

Police also repeated an announcement that 78 shelter beds were available overnight and no one who needed a place to sleep would be turned away.

The announcement was met with a chorus of obscene catcalls, as protesters shouted back that the nearest shelter was 38 blocks away and that 400 beds were needed, not just 78.

The majority of “occupiers” left the park, but a few dozen remained and continued to defy police warnings. More riot police appeared on the perimeter.

As police began the first of several charges to rout the protesters from the park, pushing and shoving ensued. Officers advanced across Washington Square, herding demonstrators and a dwindling number of homeless into smaller and smaller areas.

Just as the remaining protesters were corralled within the tent city, more police cars arrived. Officers walked shoulder-to-shoulder, clearing out the stragglers, and making the first of 16 arrests.

In a last push to secure the area, the police targeted several protesters who continued to harass officers at the southeast corner of 500 S. State St.

Two photographers were injured in the final charge, including one working for Gephardt Daily. Both men were knocked to the ground, even though they’d been told by officers minutes earlier that it was safe to stand there. Both men were attended to by EMTs before being released.

The Take Shelter Coalition, which comprises several activist groups, organized the demonstration to bring protesters into the park Friday morning.

In light of Friday’s demonstration, then-Mayor Jackie Biskupski and Erin Mendenhall released a joint statement on Saturday, saying they had reached out to activists on Washington Square to invite them to a meeting that would include Chief Brown and state and county representatives. They said the activists didn’t respond to the request.

The city has been working with the Salt Lake County Health Department “to evaluate each encampment on an individual basis and remedy those situations that pose the greatest health and safety risks,” the statement from the Mayor’s office said.

It added that special considerations have been put in place, and no cold weather gear is to be taken from those in an “active encampment” between Nov. 1 through March 31. 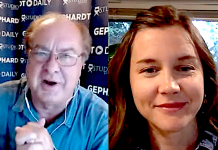 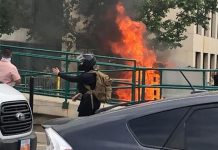