BRISTOL, England, Nov. 19 (UPI) ─ After a rare fossilized fireworm unearthed in Lebanon turned out to be a new species, British biologists looked to American rock for naming inspiration.

The scientists, who described the worm in the latest issue of BMC Evolutionary Biology, decided to title the species after punk rock musician Henry Rollins ─ Rollinschaeta myoplena.

Scientists say soft tissue marine invertebrates are so vulnerable to the crushing pressures of compacted sediment that they are rarely preserved.

“Fossil muscle tissue is rare and usually not described in any detail by palaeontologists, but our discovery highlights that soft tissues preserved in fossils can offer details approaching what we can observe in living organisms,” researcher Luke Parry, a PhD student at the University of Bristol in England, said in a press release.

“When choosing a name for our muscly beast, we decided to honor Henry Rollins, the legendary, muscular frontman of LA punk band Black Flag.”

Researchers used CT scans to detail the fossilized worm’s muscle structure. Its musculature alone allowed them classify the species within the family of marine polychaetes known as Amphinomidae. The fireworm looks remarkably similar to its modern day relatives, which can be found hunting lesser invertebrates among coral reefs.

Fireworms have especially well-formed muscles compared to their relatives. They need them to fight the currents as they look for food. Researchers say the marine worms’ buff build likely helps in preservation, while their scrawnier relatives are more often crushed ─ leading to a bias in the fossil record.

“This is the first time that any fossil has been identified by its muscle anatomy,” said study co-author Greg Edgecombe, a researcher with Bristol’s Natural History Museum.

“It’s probably more of a curiosity due to the exceptional composition and muscularity of this fireworm rather than something we might expect to turn up in the fossil record a lot,” Edgecombe added. “But it does show that when muscles get preserved, we can get a lot of information about extinct animals from them.” 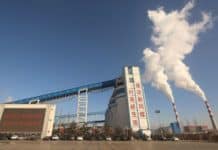