LIHUE, Hawaii, April 28 (UPI) — A man was caught on video Tuesday evening attacking a pregnant and endangered seal on a beach in Hawaii. Federal authorities are asking for the public’s help in finding the suspect.

The short cell phone video was shot at dusk on Salt Pond Beach on the Hawaiian Island of Kauai, and shows an unidentified man repeatedly striking a Hawaiian monk seal at the water’s edge.

The seal is well known to local wildlife authorities and beloved in the small community. The seal is reported not injured.

“She’s a large seal, 600-plus pounds,” said Jamie Thomton, a Kauai marine mammal response coordinator with the National Oceanic and Atmospheric Administration. “She’s a survivor … An assault by a man is something she can handle.”

Known as RK-30, she’s at least 17 years old and the largest monk seal in the area and already carries the scars from a shark attack and from fishing line that was once tied around her neck. Thornton said RK-30 is also an excellent mother.

The monk seal is only found in Hawaii and considered one of the most endangered marine mammals on Earth. The estimated population is only about 1,060. Protected under the Endangered Species Act, and the Marine Mammal Protection Act, as well as state law, harassing or injuring a monk seal is a federal crime.

The video drew outrage after it was posted on Facebook and inspired Kauai mayor Bernard Carvalho to speak on the issue.

“I share our community’s shock and disappointment as this behavior is both unacceptable and illegal,” Carvalho said. “They deserve our respect and protection, and our gratitude goes out to the bystanders who immediately contacted authorities.”

According to Thornton, if the man in the video is caught could face up to $50,000 in fines and five years in prison.

To report information on this incident, contact NOAA Fisheries Enforcement Hotline at 1-800-853-1964. 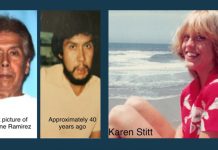