The state Department of Environmental Conservation said an officer responded to the town of Throop on July 5 to investigate complaints about a foul odor and smell coming from a large pile of burning horse manure.

The officer discovered the owners of a stable had been storing the horse feces in large piles. The owners said the piles had spontaneously combusted before, but previously the smells and smoke had been carried away from nearby residences by the wind.

“The flames spread dangerously close to a valley full of dry vegetation and dead trees,” the department said. “It took three local fire departments more than two hours to extinguish the burning manure. The stable owners were advised to take measures to mitigate the combustion problem immediately.” 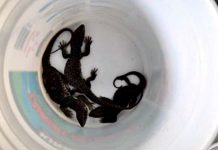