The letter, signed by Sens. Luz Escamilla and Jani Iwamoto, and by Reps. Angela Romero, Karen Kwan, Sandra Hollins, and Mark A. Wheatley, was issued Friday, more than a week after the investigation was turned over to the D.A.’s office.

It was shared in a tweet by Utah Senate Democrats. Readers may view the disturbing body cam footage here.

“We are deeply troubled to see the footage of the shooting death of Bernardo Palacios by officers of the Salt Lake City Police Department in the early hours of May 23, 2020,” the letter says.

“Watching 20 bullets being fired into the back of a fleeing suspect is cause for alarm and raises questions.

“We write you nearly five weeks to the day of Palacios’ killing and three weeks since the release of body camera footage showing events that led to his death. During the intervening period, the family of Bernardo Palacios, the officers involved in his death, and the community at large have waited for some clarity and closure regarding this incident.”

The letter acknowledged the need for a careful thorough investigation, but called on the agencies investigating to be forthcoming with information regarding the status of that investigation.

“Protesters have peacefully gathered regularly over the past several weeks, calling for answers,” the letter noted. “We join their calls but do so without prejudgment or bias. Rather, we do so in the name of providing closure so that we may take collective, concrete steps to prevent future replays of this all-too-familiar pattern.”

Read the full letter at the bottom of this article.

Palacios, 22, was shot and killed by Salt Lake City police officers who were investigating reports of an armed robbery at the Trails Gentleman’s Club near the Utah Village Motel, at 901 S. 270 West, in the early morning hours of May 23.

Police body-camera video shared by SLCPD on June 5 sparked outrage when it appeared to show officers shooting Palacios-Carbajal in the back.

Police say Palacios-Carbajal was armed and that a weapon was recovered from the scene. It does not appear in the video if the gun was ever pointed at police.

Shortly after the shooting, Salt Lake City Mayor Erin Mendenhall released a statement apologizing to Palacios. She characterized the police video as “genuinely disturbing” and told investigators to act quickly to provide answers “in a timely manner.”

The last few days the District Attorneys Office has been plastered with posters demanding “Justice for Bernardo.” Protesters put them up in the afternoon and evening; authorities remove the signs overnight.

Leaders of the protest say they’ll keep showing up until police are charged in the shooting. The two officers involved are on paid administrative leave in accordance with department policy.

On Tuesday night, police attempted to restrict protesters to city sidewalks, a departure from their previous tactics that allowed demonstrators to march in the streets. The move angered the crowd, and cops and protesters suddenly found themselves chin-to-chin. 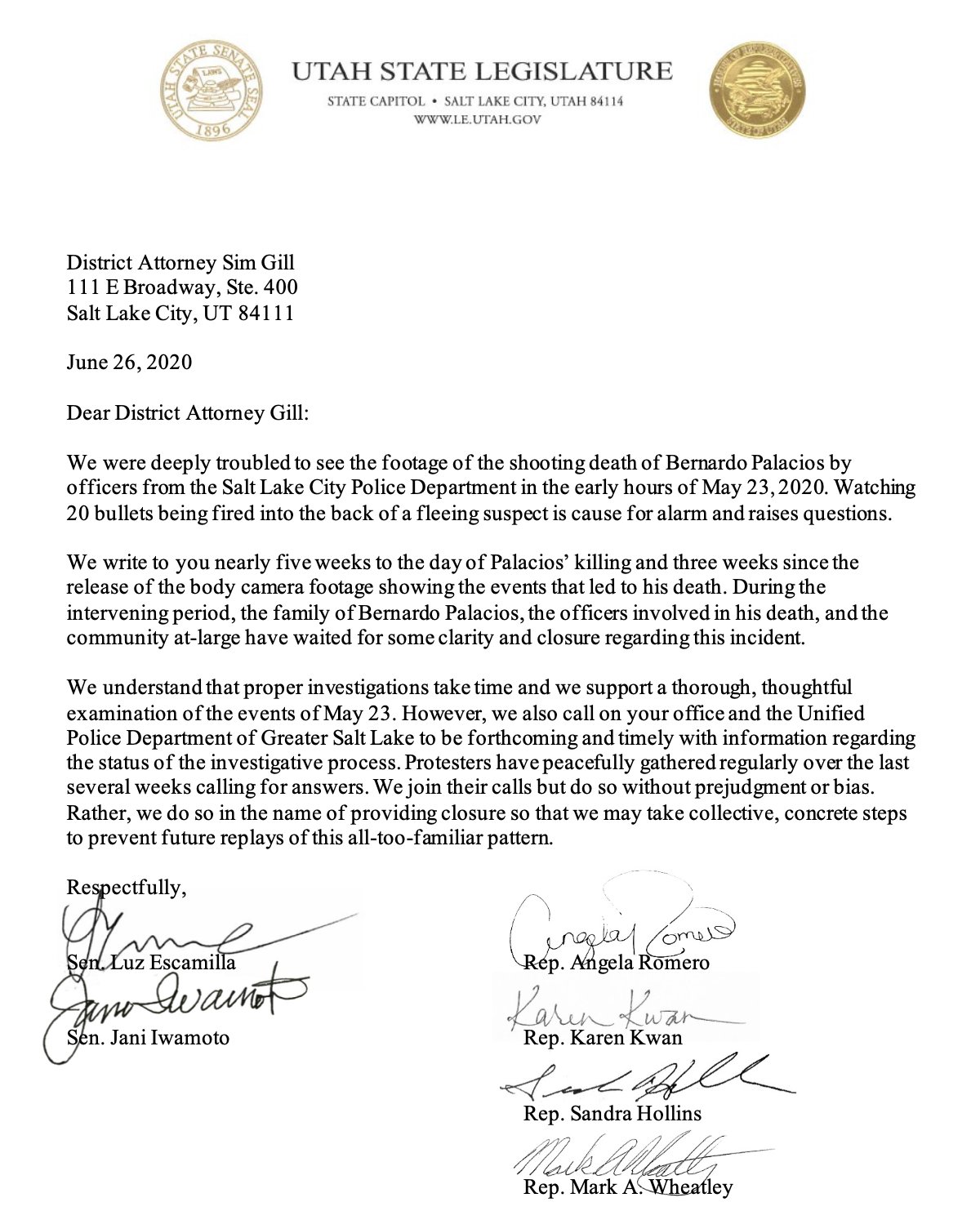