The game, from developer Next Games and titled “The Walking Dead: Our World,” will task players on iOS and Android devices to roam the real world in order to fight zombies, collect items, rescue survivors and team up with other players to complete challenges, Entertainment Weekly reported.

The concept is similar to hit mobile game “Pokemon Go,” where players would need to walk around physically in order to move their character around in the game and find Pokemon to capture.

Characters from the television series such as Norman Reedus‘ Daryl Dixon, Danai Gurira’s Michonne and Andrew Lincoln’s Rick Grimes, can be collected in the game.

A teaser trailer for “Our World” features a fan shooting down zombies in the game while attempting to take a birthday photo.

“The Walking Dead: Our World” will be available for download through Apple’s App Store and Google Play on July 12. 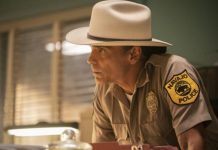