On Wednesday night’s season 16 finale, Amaro was shot in the line of duty, ending his four season run on the crime-fighting show.

Amaro’s partner Sgt. Benson, played by Mariska Hargitay, shared a few last words with her wounded colleague, saying: “I grew more in the last four years with you than I did in the 12 years I was with [Stabler]. That relationship, whatever it was, didn’t allow for anything else. But with you, with your support, I have a family. You helped me grow.”

Off-screen, Hargitay posted a photograph of the two on Twitter, writing, “#friendsforlife” 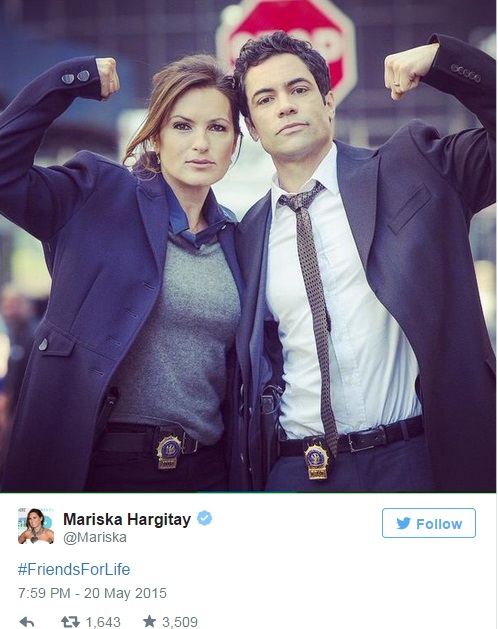 Pino, who debuted on the show in season 13, also took to Twitter, after the finale aired, to say thank you.

When the show returns for its 17th season this fall, Sgt. Benson is getting a new partner along her side, but Hargitay hasn’t got a clue as to who is filling Amaro’s position.

Before Wednesday’s finale, the actress told E! news, “Fin [Ice T] has the most experience but is happy where he is. Amaro wants it, but he’s not popular with the brass. Olivia would much prefer someone in the squad step up, but who?  Actually, I think sometimes the best person is the one you least expect.”