The 61-year-old television personality said during Monday’s episode of “The Ellen DeGeneres Show” that she spent time with Harry, Markle and their son, Archie Harrison, during her visit to London.

“It was an honor for them to meet me,” DeGeneres joked.

DeGeneres had nothing but praise for Harry and Markle, who married in May 2018. The couple welcomed Archie in May of this year.

“Seriously, they are so amazing,” DeGeneres said of Harry and Markle. “They’re the cutest couple and so down to earth. I just hate it — I see them get attacked and it’s not fair. They’re just two of the most down to earth, compassionate people. They’re doing so much good for the world.”

DeGeneres said she got to hold and feed Archie during her meeting with Harry and Markle. She said the 4-month-old weighs 15 pounds and looks like Harry.

“He looks just like Harry and had more hair than I did at the time,” DeGeneres said.

Harry and Markle had Archie christened at a private service at Windsor Castle in July. Archie wore a replica of a christening garment ordered by Queen Victoria in 1841.

Archie is cousin to Prince George, 6, Princess Charlotte, 4, and Prince Louis, 16 months, the children of Prince William and Kate Middleton. Kensington Palace shared new photos of George on his birthday in July. 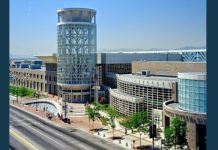 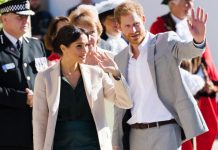