He was dressed as a disco ball for the inaugural episode of “The Masked Singer” spinoff.

“It’s harder than the ‘Singer’ because you don’t get anything, you just get to look at somebody move,” Ice-T told Variety.

“I don’t really know how they’re going to pick anybody. At least with the ‘Singer’ you get some kind of clue. But these shows to me are just fun and I think it’s like watching celebrities and known people just have fun, and I think that’s a good look.”

Jeong is also a judge on “The Masked Singer.” Green competed on Season 4 of that show, but ultimately lost out to LeAnn Rimes. 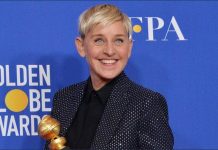