Nov. 2 (UPI) — Kristen Stewart is engaged to be married.

The 31-year-old actress said on Tuesday’s episode of “The Howard Stern Show” that she will marry her girlfriend, screenwriter Dylan Meyer.

“I wanted to be proposed to, so I think I very distinctly carved out what I wanted, and she nailed it. It was really cute, she did very well,” she added. “We’re marrying, it’s happening.”

Stewart and Meyer were first linked in August 2019. The couple made their relationship Instagram official that October with a photo booth picture of them kissing.

Meyer posted a tribute to Stewart while celebrating the actress’ birthday in April.

“Life sure is sweeter with this cute little family. Happy birthday, kiddo. You knock my socks off,” she wrote.

Stewart will next star in the Princess Diana biopic “Spencer,” directed by Pablo Larraín. The film co-stars Jack Farthing, Timothy Spall and Sean Harris, and opens in theaters Friday. 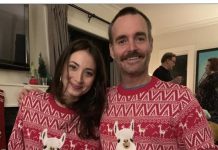 ‘Last Man on Earth’ alum Will Forte is engaged