This 21st century-set season of the dark comedy/mystery series will also star Ewan McGregor and Carrie Coon. It is to debut early next year.

Winstead, 31, is best known for her work in the TV shows “Wolf Lake,” “The Returned,” “Mercy Street” and “BrainDead,” as well as in the films “10 Cloverfield Lane,” “Swiss Army Man,” “Scott Pilgrim vs. the World” and “A Good Day to Die Hard.” 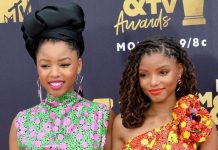