The Hollywood Film Awards ceremony is to take place at the Beverly Hilton Hotel in Beverly Hills on Nov. 1.

“The Hollywood Film Awards is an incredible brand, previewing some of the biggest movies and stars of the year, while launching the award season,” Allen Shapiro, chief executive officer of dick clark productions, said in a statement Thursday. “We are honored to have Robert De Niro as this year’s recipient of the Hollywood Career Achievement Award.”

De Niro, 72, is currently starring in The Intern and will soon be seen in Joy. His other film credits include Raging Bull, Taxi Driver, Mean Streets, The Godfather, Part II, Awakenings, A Bronx Tale, Meet the Parents, Goodfellas, Silver Linings Playback and American Hustle. 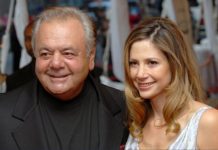