LAS VEGAS, Feb. 21 (UPI) — Zoolander 2 co-star Will Ferrell was out stumping for Hillary Clinton in Nevada this weekend after previously voicing support for her fellow, Democratic presidential candidate Bernie Sanders.

Clinton tweeted a video Saturday of the funny man telling Nevada voters to caucus for Clinton.

“It’s really important that everyone shows up to caucus,” he is seen saying as he walks with former President Bill Clinton, Hillary Clinton’s husband.

Clinton’s representatives told CNN Ferrell has donated money to her campaign and is co-hosting a fundraiser for her in Los Angeles Monday.

They had no comment, however, when asked about Ferrell’s previous support of Sanders. 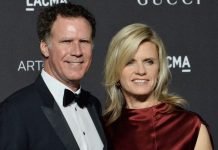 ‘The Shrink Next Door’: Paul Rudd takes over Will Ferrell’s life in new trailer