“At about 11:15 p.m. a white Toyota Camry was northbound on SR-163 around mile post 18, just north of Forrest Gump Hill,” said a statement from Utah Highway Patrol. “The Toyota was traveling at an unknown speed northbound when it left the roadway. The single occupant driver was unable to regain control of the vehicle.”

The Camry rolled over, ejecting the male driver, who was the only occupant, the statement said. He has not been identified pending notification of family members.

“Medical was dispatched, including air medical, to the scene,” the statement said. “Lifesaving measures were attempted but the driver eventually died on scene.”

Speed and drug impairment are being investigated as possible contributing factors. The driver also was not wearing a seat belt, the statement said. 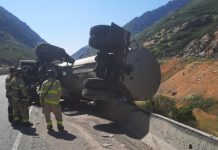