NEW YORK CITY, New York, Jan. 13, 2020 (Gephardt Daily) — Abby Huntsman announced Monday morning she is leaving “The View” to work with her father, Jon Huntsman Jr., on his campaign for governor of Utah.

Hunstman, 33, said on the show: “Today, I’m saying goodbye,” adding the move is something she’s “thought about a lot.”

She then announced that she will be the senior adviser to her father’s campaign, and is looking forward to spending more time with her family.

Huntsman said she made the decision over the winter hiatus from the daytime talk show. Her last show will be Friday.

“My No. 1 priority has always been my family, and you taught me the first day I got here,” she said. “When you take a step back and you think about life, think about your kids, think about what you want to do every day that just gets you going, and there’s no one I believe in more than my own dad right now to run for politics and I get emotional because I do love him so much.”

She added: “He believes in me to go help run that. I couldn’t be more excited to go help someone that I love. It’s not often in life that you get these moments to go fight for something that you are so passionate about.”

Huntsman joined as co-host of the Emmy Award-winning daytime talk show in its 22nd season in September 2018, and has been on the show for two seasons.

She also addressed her co-hosts:

“I just want to give a big thank you to you guys first and foremost because you guys are friends.

“I’m so thankful for this opportunity and I’m also very excited about the next chapter, so thank you to all of you.”

Huntsman shared a photograph with her and father on Instagram over the weekend, captioned: “Back to my Utah roots campaigning with this guy. Democracy in action.”

Former Utah Governor Huntsman Jr. announced on in November that he will again seek that office again in the 2020 election.

Speculation about Huntsman’s possible run to replace current Governor Gary Herbert, who is not seeking re-election, began to swell in August, when Huntsman announced his resignation as U.S. Ambassador to Russia. At that time, he cited his desire “to reconnect with our growing family and responsibilities at home.”

Huntsman currently lives in Utah, and many of his seven children with wife Mary Kaye Huntsman reside in the area.

Huntsman also sought the Republican Party’s 2012 election nomination, but later dropped out of that race. 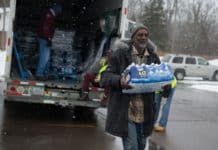