Dec. 14 (UPI) — The Air Force said on Monday it removed 27 people for not obeying orders to receive a COVID-19 vaccine, marking the first dismissals by the U.S. military for refusing to get inoculated.

More than 97% of Air Force members are vaccinated against the coronavirus, but that still leaves thousands throughout its ranks who have turned away from getting vaccine doses. The Army has a deadline of Wednesday for its personnel to get vaccinated.

The Air Force said the discharges involved active-duty members but the branch did not publicly break down between airmen and guardians. More than 3,200 active duty Air Force members had refused to take a coronavirus vaccine at the time of the Air Force’s deadline to get inoculated on Nov. 2.

On Nov. 1, the Air Force announced that it had discharged nearly 40 basic military and technical trainees, who were not yet officially part of the Air Force, for refusing the COVID-19 vaccine. 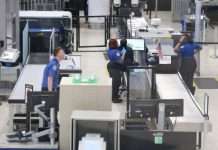