ZION NATIONAL PARK, Utah, July 12, 2020 (Gephardt Daily) — A dog died July 4 after swimming in the North Fork of the Virgin River in Zion National Park and allegedly being exposed to a harmful algal bloom.

The DEQ’s Division of Water Quality and the National Park Service received a report from Zion National Park of a dog dying an hour after swimming in the North Fork, said a news release from the Utah Department of Environmental Quality.

“The dog was playing in the river and at one point was ‘snapping’ at algae growing on the rocks,” the news release said. “Prior to its death, the dog exhibited symptoms consistent with possible exposure to cyanobacteria toxins — those produced by harmful algal blooms. The dog could not walk, was in pain, and was having seizures.”

Results from water samples taken in the river were received Friday night and show anatoxin-a concentration greater than 55 micrograms per liter in some samples. The health threshold for primary recreation from the Utah Department of Health and DWQ is 15 micrograms per liter. Additionally, harmful cyanobacteria that produce anatoxin-a were identified in multiple areas of the North Fork of the Virgin River.

The Southwest Utah Public Health Department has issued a public health warning for the affected areas of the North Fork of the Virgin River, the news release said. Signs will be posted to advise recreators of the risks associated with exposure. In addition, Zion National Park has posted signs to warn visitors not to swim or submerge themselves and to keep pets out of the water. Residents should adhere to the following guidelines:

• Do not swim in this area.
• Avoid areas of algae scum.
• Keep animals away.
• Do not drink the river water, including water passed through a purifier.
• Clean fish well and discard guts.

Pet owners should be careful not to let animals play in the river, drink from the river or eat algal scum. This warning does not apply to Quail Creek Reservoir, Sand Hollow Reservoir, or the Santa Clara River basin.

“Additionally, the Utah Division of Drinking Water is working with local utilities to ensure
finished drinking water, that originates from the river, is free of cyanotoxins,” the news release said. “Currently Washington County Water Conservancy District, Zion National Park, and the towns of Virgin and Rockville are not using the North Fork of the Virgin River as a drinking water source. To date, tests of Springdale drinking water and agricultural water have not detected the presence of cyanotoxins. Advanced water treatment technologies can remove cyanotoxins. The town of Springdale will continue testing finished drinking water to make sure the water is safe.”

DWQ, Zion National Park, and local authorities will collect additional samples next week to
further inform the extent of the concern. For concerns about possible human exposure, call your physician or the Utah Poison Control at 800-222-1222. For concerns about possible animal exposure, contact a local veterinarian. The public is encouraged to watch for signs of harmful algal blooms and report suspected blooms to DEQ at 801-536-4123. The latest sampling updates are posted regularly here. 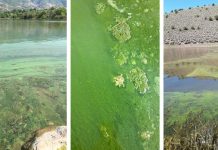 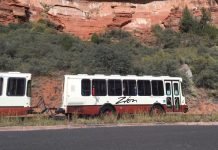 Shuttles return to Zion National Park for the holidays