SALT LAKE CITY, UTAH, Feb. 1, 2021 (Gephardt Daily) — Those who believed we would be turning some sort of magical corner at the stroke of midnight New Year’s Day 2021 were right, it just hasn’t been the type of magic they hoped for.

Even before their Jan. 4 inauguration, newly elected Gov. Spencer Cox and Lt. Gov. Deidre Henderson realized plans for distributing COVID-19 vaccines needed to be revamped. They also knew the number of available doses was a fraction of what had been represented by Washington, D.C., during the final throes of the Trump presidency.

They planned to take immediate action.

Two days later on Jan. 6, as the new administration attempted to focus on COVID, they found themselves watching in disbelief as the U.S. Capitol was sacked. In the following days, Cox declared a state of emergency, dispatching hundreds of National Guardsmen to the Utah Statehouse due to threats of possible violence prior to Joe Biden’s inauguration.

Not exactly the most nurturing environment for a warm and fuzzy honeymoon, but Cox and Henderson have pressed ahead.

Against the backdrop of the killer pandemic, a burgeoning homeless crisis and a police force strained by the 290 protests in SLC last year, they are moving forward with an aggressive plan to combat Salt Lake’s dramatically rising crime rates.

On Episode #15 of the Bill Gephardt Show, Mendenhall and Brown talk about their new strategy for stemming violent crime, while Lt. Gov. Henderson talks about her mission to make sure every single dose of vaccine that arrives in Utah is used within one week.

To see and hear more from Mendenhall, Brown and Henderson, please click on the player below. 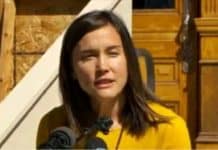