Sexual assault and robbery suspect Dino Raul Morales, 28, was shot and killed when two Ogden Police officers opened fire after he emerged from hiding in the bed of a pickup truck while holding a .380 Ruger handgun.

Body-camera video reveals Morales was told repeatedly to show his hands. When officers realized he had a weapon, they ordered him to drop it at least twice before he was shot and killed. More than 20 seconds passed between the time he emerged from the back of the pickup truck and the shooting took place.

Morales was being sought on a reported sexual assault, robbery and vehicle theft when he was pulled over by officers near 30th Street and Washington Boulevard about 7:37 p.m.

As officers approached the vehicle, a female passenger jumped from the car and surrendered, according to a statement by Ogden Police Chief Eric Young.  Morales then  “exited from the driver’s seat and ran on foot from the officers, west on 30th and Washington Boulevard,” Young said.

As police searched the neighborhood, they found Morales hiding in the bed of the pickup truck behind a nearby home.

Neither officer was injured in the shooting and both remain on paid administrative leave as per Ogden Police Department policy.

Investigators say Morales was from California with a previous felony conviction, which  effectively prohibited him from legally possessing a firearm. A still image excerpted from the body-cam footage showed that the .380 Ruger pistol Morales was carrying held an extended ammo clip.

To view the body-cam video, follow the link below to the Weber County District Attorney’s Office.

Warning: this video is graphic and may be disturbing to some viewers. 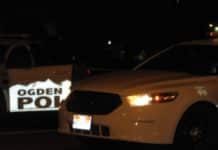 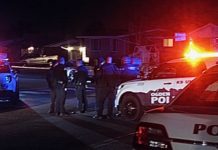